Why get raw milk? 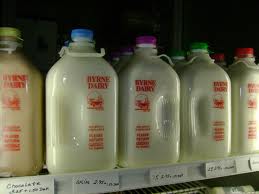 Most people only get to hear the negative from the media about raw milk, but as usual, it is not true. It is safe, like raw anything, if the source is good. Not only is it safe though, it is very much more healthy for you too!  It can even be money saving. . . It kind of depends how you are eating in the first place.

For one thing, you can either pay the farmer, or the pharmacy. For another thing, if you are already paying the farmer, through a middle man, and paying big bucks for the good stuff, like grass fed butter, organic buttermilk, organic milk, organic yogurt. . .you might as well get the stuff that allows you to almost effortlessly make your own. Sadly, once milk has been pasteurized, it will parish quickly, and it isn't easy to make anything out of it, even when you do add back some good bacteria to it. I have had little success with making even yogurt with pasteurized milk. Pus you get no benefits of using the different part of it when it's homogenized.
With raw, live, whole milk you get:


All in all, I've found it well worth my effort and money, and I think you will too. Check it out more here at some great resources I've found.

BLOG chronicling the raw milk legal battle in in California, Michigan and other states: http://www.thecompletepatient.com/
Home dairying and cheesemaking: Fias Co Farm, http://fiascofarm.com/
On Mercola.com: The Real Reasons Why Raw Milk is Becoming More Popular http://www.mercola.com/2004/apr/24/raw_milk.htm
On YouTube: Organic Pastures Dairy owner Mark McAfee talks about raw milk
The Douglass Report with the benefits of raw milk
National Internet Forum that covers many regions dedicated to the Health Benefits of raw goat milk. Suppliers of milk, consumers and all are welcome!http://health.groups.yahoo.com/group/raw_goatmilk/
"Baby I Like It Raw" interview with Mark McAfee: http://www.sicklycat.com/2010/07/18/baby-i-like-it-raw-video/

Real truth on the safety of milk, and a series to follow.
http://chriskresser.com/raw-milk-reality-is-raw-milk-dangerous

Enzyme Nutrition, Edward Howell, MD: Pioneering work on the role of food enzymes in diet and health. Reveals the dangers of diets composed entirely of cooked foods and problems posed by pasteurization of dairy products.
The Raw Truth About Milk (formerly The Milk Book), William Campbell Douglass II, MD: Excellent explanation of the dangers of pasteurization, written in a highly amusing style. Where to get it: Douglass Family Publishing, www.douglassfamilypublishing.com/. The book is printed in the U.S. so there are no ordering problems. The new edition, revised and expanded by two chapters is titled The Raw Truth About Milk. The original Milk Book sold over a million copies and, with the new chapters, it is better than ever. Do not order The Milk Book as you will not get the important new chapters on how vegetarianism often leads to anorexia and the consumption of soy "foods" causes serious health problems.
Nourishing Traditions: The Cookbook that Challenges Politically Correct Nutrition and the Diet Dictocrats, Sally Fallon with Pat Connolly and Mary G Enig, PhD: Full spectrum nutritional cookbook that dispels many myths about animal fats and traditional foods.
Nutrition and Physical Degeneration, Weston A Price, DDS: The classic study of isolated populations on native diets, and the disastrous effects of processed foods and commercial farming methods on human health. Published in 1939, Dr. Price's findings have as much relevance today as they did 60 years ago. All who plan to bear children, and everyone in the practice of medicine, should read this book, which is now available in affordable soft cover.
The Ploy of Soy: A Debate on Modern Soy Products, Sally Fallon and Mary Enig, PhD: An exposé on the dangers of modern soy products, often promoted as "better than milk."
The Untold Story of Milk, Ron Schmid, ND
To purchase these and other publications, contact: Radiant Life (888) 593-8333

Email ThisBlogThis!Share to TwitterShare to FacebookShare to Pinterest
Labels: Health