Not a matter of intelligence, but mentality"


Archaeology, linguists and science again disprove the Bible's "inspired" "historical" accounts as nothing more then outdated unscientific thoughts. For instance, creation science has no solution to the conflict which exists between Gen 11:1-9 and the archaeological data which show that many people groups were speaking different languages during and prior to the building of the tower of Babel.

In Gen. 11:1 we read "Now the whole earth had one language and the same words." The Bible writer was able to speak of "all the earth" having just one language because he had no knowledge of the lands and peoples of the Americas, Australia, the Far East, or even of all of Africa or Europe. As far as he was concerned, the earth extended only from Sardinia to Afghanistan, and from the southern tip of the

Arabian Peninsula to the northern boundaries of the Black and Caspian Seas
(Gen 10); and the descendants of Noah had not yet spread out over even this
limited earth (Gen 11:4). Of course Christians all along have claimed that the "divine revelation" of the  God of the Bible was accommodated to the writer's limited understanding of geography and anthropology. . .but if that was true and He was directing man to write every word, why not simply just leave those parts out?

We see another example of such "divine accommodation" to the limited geographical
knowledge of the times in the NT as well. In NT times educated people were now
aware that the earth was a globe, but believed that the extent of the land area
which mankind inhabited was only slightly greater in longitude than the extent
of the earth in Gen 10 and not significantly greater in latitude. This limited
area of land was also believed, as in OT times, to be encircled by a great
impassable ocean. So in NT times just as in OT times, the southern coast of
the Arabian Peninsula was understood to be the southern limit of the entire
land continent including Africa, the place where the land inhabited by man lit-
erally came to an end. 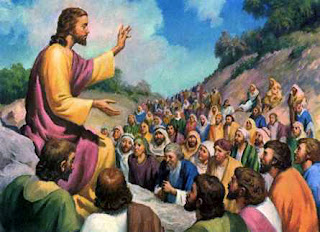 So when then we read Jesus' statement in Matt 12:42/
Luke 11:41 that the Queen of Sheba came "from the ends of the earth,"
we may make the mistake of removing the statement from its historical context
and understanding it in terms of our modern geographical knowledge as a
merely figurative way of saying "a long distance." But the hearers of Jesus understood
the statement literally. The "ends of the earth" referred to the boundary between the inhabited earth (essentially a single land mass) and the ocean that was believed to surround it.
To the hearers of Jesus there was no land south of that, for there was no land beyond "the ends
of the earth." Hence, if they had thought that his "inspired" statement necessarily
reflected God's omniscient knowledge of geography, it would have misled them
into believing that God agreed that there was no inhabited land south of the land of
Sheba.

The statements of Matt 12:42, Ps. 72:8, Gen 1:14, and Gen 11:1 all reflect this ancient understanding of the extent of the earth, which did not include the Americas, Australia, the Far East, or even all of
Africa or Europe. They are all supposedly "God's accommodations" to the known geography of the times. 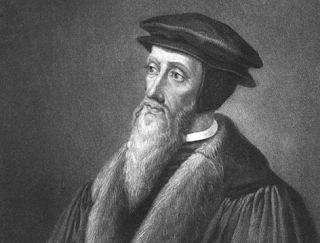 John Calvin believed that for the sake of being easily understood, the description of the garden
of Eden would be accommodated to the topographical knowledge available in the time of Moses.
This is a reflection of Calvin's strong belief that Scripture was written in terms which
any common Israelite could understand. Similarly, when Gen. 1 was criticized in Calvin's day for speaking of the sun and the moon as "two great lights" and the stars as small in comparison, (even
though astronomers had proven that one of those stars, Saturn, was larger than
the moon,) Calvin acknowledged the validity of the scientific facts, but  realized that
Gen 1:16 was at best a reference simply to appearances and that the Holy Spirit
had "no intention to teach astronomy."
He claimed the Bible writers did not treat the stars, as a
philosopher would do; but he called them [the sun and moon] in a popular
manner, according to their appearance to the uneducated, rather than according to
truth.

Calvin did not expect the Scriptures to reflect modern scientific knowledge.
He even goes so far as to contrast the biblical description of
nature given in Genesis with modern scientific knowledge.
Calvin also invites those of his readers who might be interested in learning real science to come not to Gen. 1, but "to go elsewhere." And he clearly delineates that "elsewhere" is referring to
modern professional scientists.

John Calvin did not have the data available from anthropology and ancient history that we have today. This data shows clearly that it is not merely appearances that are important here, but the prescientific conclusions drawn from those appearances which are in view now. For the ancients though, the appearance was their reality.

So stars could fall to the earth without destroying it (Dan 8:10). (The idea that one
of those stars (Saturn) was larger than the moon would have seemed incredible to them.)
In NT times even many educated people still believed the stars were as small as they appear.
In the Sibylline Oracles both in 5:514-31 (first century A.D.) and in 7:124-25 (second century A.D.), every star in heaven falls and hits the earth; and although they cause a conflagration, both earth and man remain. In the NT, accordingly, the stars can fall and hit the earth (Rev 6:13,"into the earth,") without destroying it.  This verse, incidentally, is another example of God's supposed "accommodation to the limited scientific knowledge of the times."

As late as the end of the fourth century, Augustine, after raising the 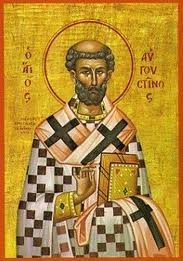 Given the fact that people as late and as sophisticated as Augustine under-
stood Gen 1:16 literally, there can be no question that the original hearers of
Gen 1:16 understood the words literally. To the original hearers,
the sun and moon really were literally "the two great lights." And when they believed,
as August-ine did, that this "inspired" statement in Gen 1:16 reflected God's omniscient
knowledge of astronomy, it misled them, as it misled Augustine into believing that the sun and moon really were larger in size than the stars. This same thinking leads many Christians away from scientific progress and freethinking even today, as it has in every culture dominated by religion.

Calvin's understanding of the fact that modern scientific facts are not being
revealed in Gen 1:16 is a significant advance on Augustine's understanding.
Since Calvin had a deep commitment to interpreting the Bible within its historical
and cultural context, I think it is probable that if he had had the anthropological and
ancient Near Eastern data available which we have today, he would have used it, and likely come to the same conclusion that the scientists are predominantly today. . .
He would have realized that such ideas as the solid firmament (Gen 1:6), the water above
(Gen 1:7), the earth founded upon the seas (Ps 24:2), and the sun and moon as the largest lights
(Gen 1:16) are prescientific beliefs, typical of their time.

Accordingly, instead of referring simply to appearances, I think he would have recognized they are
really accommodations to the scientific "notions which then prevailed." So our recognition of the fact that Scripture doesn't lie but is nieve to the scientific facts we now know should make us tolerant for others still holding themselves to believing it. . . but to let Christians excuse away the blatant untruths of their inspired book on the grounds that "God" was supposedly temporarily allowing a prescientific people to hold onto their ingrained beliefs about the natural world so he would be following the principle of becoming "all things to all men. . .? Sorry, I don't buy it.

With the knowledge we have available today I do not believe Christians are following Calvin, (or Jesus for that matter) if we are simply following him based on what his present culture understood naively as truth. Calvin was a reformer willing to break with ecclesiastical tradition to find truths. (As was Jesus!)
Augustine saw Gen 1:16 as a revelation of scientific truth, and chose to ignore the truth because he believed the Bible was unchanging and inspired. Calvin saw that Gen 1:16 was at best a reference simply to appearances out of ignorance. These are clearly two different approaches to the subject of the relationship of Scripture to modern scientific knowledge.

The inability to understand a concept which does not fit a current paradigm is not a matter of intelligence, but of mentality, that is, of culturally ingrained concepts, like different religions. . . Sometimes, because of a radical difference
in cultural background, a modern concept simply cannot be accepted as truth,  no matter the science behind it.

I can only hope that in our culture of enlightenment and ready info, we can follow in the steps of the radical reformers and follow the science and morals of the present, not the myths, biases and preconceived notions of the past. After all "WWJD?" And more importantly, what did he do, even with his cultural biases and prescientific notions. . .think about that! It's what made me turn away from all religion. . . going against the core beliefs that Jesus only spent his life fighting against the symptoms of. (And sadly his disciples replaced the bad he fought with more bad, and just renamed it with other terms.)
Now today I fight along with him and all revolutionaries of the past who ever fought for equality and justice. Won't you join us?