Just the facts on Vaxs

Presently, compliance with the Center for Disease Control and Prevention's (or CDC's) immunization schedule for children requires 60 vaccines (and rising) be administered before a child is 6, purportedly to make them healthier than non-vaccinated or naturally immunized ones. The only real justification for using vaccines to "immunize" ourselves against disease is derived from the natural fact that when challenged by infectious or toxic agents the immune system launches a successful response capable of giving immunity. Were it not for this success of our immune system in dealing so well with these challenges, vaccination would have no cause, no scientific explanation and no justification whatsoever. Indeed, infectious challenges are necessary for the development of a healthy immune system and in order to prevent autoimmune conditions from emerging. In other words, take away these natural infectious challenges, and the immune system can and will turn upon itself in boredom; take way these infectious challenges and immunity (because of hundreds of thousands of pathogens we are exposed to throughout our lives,) would not be possible. 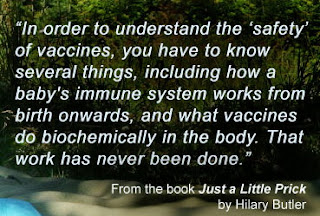 A new paper published in the journal Lupus entitled Mechanisms of aluminum adjuvant toxicity and autoimmunity in pediatric populations, points out that as many as 125 antigenic compounds, along with high amounts of aluminum adjuvants are given to children by the time they are 4 and 6 years old, in some "developed" countries. (Common adjutants include: aluminum, mineral oil, detergent stabilized squalene-in-water, pertactin, formaldehyde, viral DNA, phosphate, all of which are inherently toxic, no matter what the route of exposure.
In essence, they enhance vaccine "efficacy," which is defined by the ability to raise antibody titers. Your body basically has an allergic reaction to these vaccine adjuvants, and they tell us that's proof for them working! In reality, the very fact that your body is kicking and screaming against these substances are proof of the toxicity of them. It is easily seen that these compounds are able to cause these horrible side effects, just looking at what they are, and how they work.


A vaccine's "effectiveness," on the other hand --  which is the real-world measure of whether a vaccine works or not -- is not ascertainable through the number of antibodies produced. The confusion between "vaccine efficacy" and "vaccine effectiveness" ensures that vaccines which disrupt/harm/hypersensitize the immune system (by stimulating unnaturally elevated antibody titers) may help obtain to get FDA approval, but they have never been shown to give protection. It is this trick (conflating and confusing "efficacy" with "effectiveness") which convinces most of the "developed" world that vaccine research is "evidence-based" and focused on creating enhanced immunity, when in fact it is primarily a highly successful business enterprise dependent on defrauding its "customers" of both their money and health. The dangers of common vaccines are so well known by "health experts," and the manufacturers who produce them that their risk is underwritten by world governments.

Some vaccine researchers have even said that breastfeeding may reduce vaccine-induced elevations in antibody titers in infants ( which is very good!) because of its immunity promoting and neutralizing effects. While that would tell a thinking person that it must be doing a good thing because of breastmilk's many good properties, the CDC would like us to believe that is bad! In their words, "The CDC suggests that the neutralizing effects of breast milk may reduce the effectiveness of the live vaccine among children. The CDC recommends mothers should consider delaying breast feeding at the time of immunization."

Adequate breastfeeding, in fact, is the most successful strategy in the prevention of morbidity and mortality associated with infectious challenges, and yet still only 47.2% of infants in the US are reported by the Centers for disease control and Prevention to be exclusively breastfed through the first six months of life. Because of this protection from vaccines, breastfed children aren't having as much infections or SIDS, (both of which vaccines are notorious for causing) and having superior mental health and IQ, which neurotoxins in the vaccines would otherwise likely cause issues with. It would be interesting if they could show stats on the health of breastfed, non vaccinated children's health, as compared to breastfed vaccinated children's health. . .I think that would tell a lot more then what is usually studied. 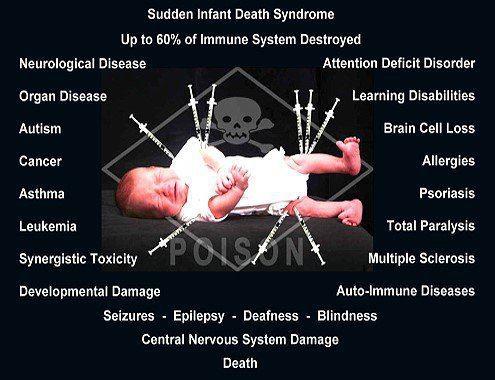 So, not only have many humans strayed from their roots of breastfeeding their babies for  good immunity (much less ecologically breastfeeding with no pacifier and often through the age of 3 or 4, like is used in other countries for good health of baby, momma, and a safe birth control)  they attempt to replace it with a synthetic immunity.

The CDC's immunization schedule reflects a callous lack of regard for the billions of years of evolution that brought us to our present, intact form, without elaborate technologies like vaccinations. It is a philosophy of "trans-humanism", a movement which intends to improve upon and transcend our humanity, and has close affiliation with some aspects of eugenics.

The CDC is largely responsible for generating this mass public perception that there is no harm in injecting well over 100 distinct disease-promoting and immune-disrupting substances into the bodies of healthy children. They have also been successful in instilling the medical model of care for taking care of healthy individuals who are doing normal things, like birth and death, and everything in between. Basically,  encouraging the mindset that Nature failed in her design, and that medical and genetic technologies and interventions can be used to create a superior human being, system. . .etc. (The other government organizations further that mindset with their creations of GMO plants and even now GMO people!)

With this mindset, and in this culture, the non-vaccinated child is deemed as "inferior," "dirty,"and perhaps even "sub-human" to those who look upon vaccination as the answer to what "perfects" the human immune system. Trans-humanism thus dehumanizes those who do not share the same way of thinking and behaving. . .or in the case of the Jews in the Holocaust, also the same way of looking. It wasn't just the Germans in the past that fell for this dehumanizing of "inferior" people, that ended in Eugenics. . . America was almost as guilty of it as Germany! (We just saw the ending result of it with the Holocaust and decided it wasn't as good as it had previously looked.) 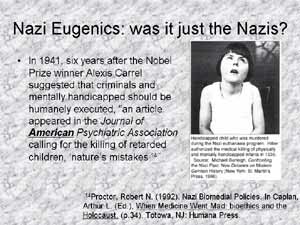 The eugenic undertones of mass vaccination is a cult that is now only thinly veiled, as we move closer to the point where the dictatorship lays claim to not only our minds, but our very bodies, and the bodies of our children.

The sad fact though, is that instead of improving our health, vaccinated children are shown        inferior, and to be the ones spreading the diseases!
Source
The vaccinations in fact are now being shown to increase a persons susceptibility to the actual full blown disease! (And as often seen with chickenpox, they usually get a worse case of it.)
Source

Immune challenges during early development can lead to permanent detrimental alterations of the brain and immune function. Experimental evidence also shows that simultaneous administration of as little as two to three immune adjutants can overcome genetic resistance to immunity dysfunction. Thus, the body manifests these alterations to the brain and immunity in symptoms that even doctors and the vaccine companies agree are common after vaccinations such as:

Also, valuable immune resources are wasted in response to threats which may not readily exist in the environment. Diseases caused by undernourishment and unsanitary conditions wouldn't normally be a threat to most Americans, but because of vaccines introducing the viruses, weakened individuals may then succumb to the synthetic form of the diseases that would have naturally died out with advances in food availability and sanitation (in non war times) if it weren't for the vaccines.


There is the seasonal flu vaccine which gives you one of the over 200 different strains of the influenza, completely guessing which one will take over as the dominant strain that given year- at the price of distracting your immunity away from the real threats, as well as exhausting and/or damaging the entire immune system. (Truth be told, there is actually a shocking lack of evidence to support flu vaccines, in any age or population.)


What's worse, the vaccine response can causing loss of self-tolerance and the body can start to attack itself, bringing on a host of auto immune diseases! The first line of defense against infection is compromised and the "front door" can be left wide open to infections and diseases.

It is clear that one can create a synthetic immune response through vaccination, (more like an allergy reaction,) but it is not likely to result in enhanced immunity, (as all allergies reduce the immunity) which is the only true judge of whether a vaccine is valuable or not. (Source: here)

Natural Healers knew the cause and cure (Case mortality: 0-2%) of Smallpox from at least the 17th century, that being good care, sanitation, food and sunshine. Yet though the medical mafia (Allopathy Inc) of the day enforced their poisonous 'medicines' (such as alcohol, arsenic and mercury) upon the public, they suppressed the real causes of the diseases (as they do to this very day). 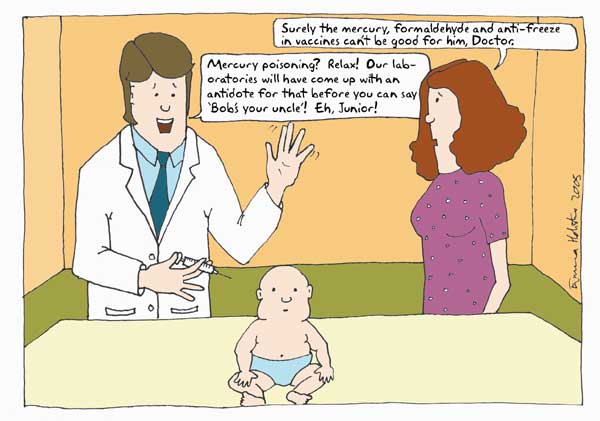 They then had the ground set for vaccination and with it the spread of smallpox and other diseases around the globe for over 150 years. It is a huge money makes that serves not only the goal of making more money for the rich, but population control, which has been the goal of world governments for quite some time now.

Vaccination is remarkably easy to demolish purely through Statistics and charts like these here that show how the vaccine likely did nothing (good) at all, but yet the vaccines were conveniently given the credit later for the drop. 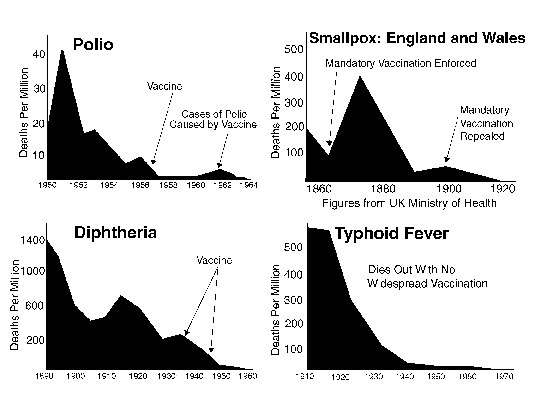 With the media being controlled by the very companies making the money off of the vaccines, we are unlikely to see those stats though without looking closely, or on a global scale. "The bottom line is that the medical systems are controlled by financiers in order to serve financiers. Since you cannot serve people unless they get sick, the whole medical system is designed to make people sicker and sicker." 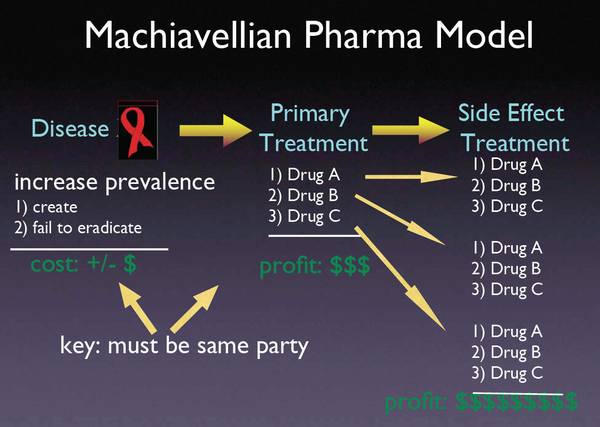 Even if you still believe vaccines do some good, there is a vast amount of Suppressed evidence  to show they do far more harm than any conceivable good (Vaccine disease). You wonder then why everyone seems to believe they work? Not only do most people still believe it's better for them to choose to vaccinate their own child, when 23,280 parents were polled, 37% of them felt that it wasn't good to even allow other parents the choice of whether or not to vaccinate their child! Our rights as protective parents are in jeopardy! But the tide may be turning with info now getting out there via the internet. . .

Study out the vaccination conspiracy/debate and you will be led into Medical Politics and Medical mind control ploys. Of course, the main reason for vaccination is as it always was, (Why Vaccination Continues and Covert vaccine agendas) creating diseases to be treated by the "Big pharma". But I suppose that would make me a "conspiracy theorist". . .a sadly derogatory term for, "people in the know":)